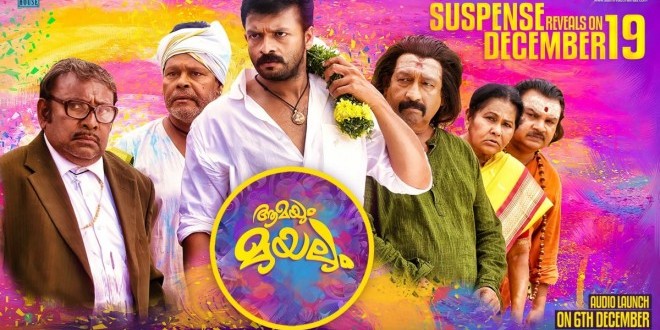 A Priyadarshan movie,this sentence at the end of title cards used to be the benchmark for an average Malayali film lover, who adored colourful entertainers. He was the pastmaster of the art of turning the screen into a riot of colours. His ability to churn out wholesome entertainers from even harebrained plots was widely acknowledged. Well,times have changed and the once prolific and successful director has thrown the dice one more time with ‘Aamayum Muyalum’, in an attempt to regain his glory. The title itself is interesting and has a child like innocence or a fable like hidden meaning. It is all fun and frolic, just no holds barred entertainment. As is said often, leave your brains at home and just soak in the fun.

It all unfolds in an imaginary village which is in the borders of Kerala. Yes, it is imaginative to the hilt and there is little in it to believe that it has even a tinge of reality. Imagination running riot is not necessarily a bad thing and Priyan has showed his guiles in how to create an atmosphere of willing suspension of disbelief. Here we have a lottery assuming centrestage. We know how beautifully Priyan crafted that hilarious lottery scene in ‘Kilukkam’. Here he stretches that sequence into a full length movie. There is an abundance of situational humour and the slapstick with the Priyan stamp.           Kallu, Nallavan, Bandaravathi, Thamara etc. are the names of main characters and they do have rustic charm in abundance. The events that happen in the movie may seem somewhat exaggerated. But then the director’s intentions are loud and clear. He just wants to transport the viewer to an imaginary land. The character of Jayasurya may be the protagonist but more screen time is usurped by Priyan regulars like Nedumudi Venu and Innocent. The commotion caused by the lottery ticket,people running helter skelter and in the end it catches fire in the free for all climax. There are some characters which are modelled on Priyan’s endearing hit ‘Thenmavin Kombathu’. But who can reprise the brilliance of Sukumari or someone else for that matter? Nedumudi Venu who shows flashes of his vintage self is the show stealer here.Innocent looks somewhat jaded but his antics do evoke laughter. Jayasurya deserved a better etched character,one felt.Pia Bajpai is eye candy while Bhavana Pani looks ravishing in the item song. The frames do have that captivating Priyan touch, when the cameraman turns just an instrument in the hands of the director. But one feels M.G.Sreekumar will have more longevity as a singer than as a music director.       ‘Aamayum Muyalum’ is basically an attempt by Priyan to rediscover himself. Much water has flown under the bridge since he used to be the last word of commercial success. How much Priyan has managed to connect with the audience of the present is the moot question. Gimmicks and recycled comedy sequences are acceptable as long as they keep the viewer hooked. ‘Aamayum Muyalum’ doesnt diminish the celebrated Priyan touch. It may not be his finest work, but it gives glimpses of old Priyan.