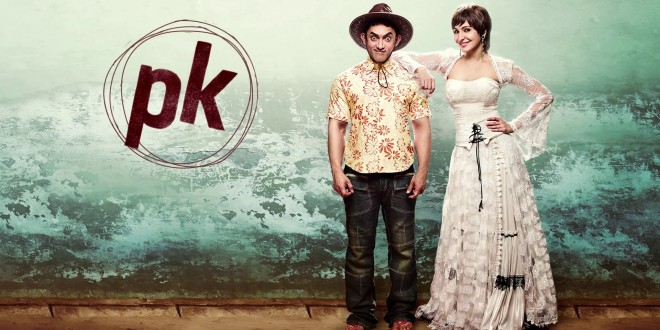 Aamir Khan- Anushka Sharma starrer Rajkumar Hirani’s ‘PK’ box office collections crossed Rs 30 crore on first day, according to initial reports. The film, which opened on a high note with high occupancy rate, did excellent business, considering it was released on a working day. The opening day box office collections augur very well for the film and if similar pace is maintained, ‘PK’ box office collections could be more than Rs 40 crore during Saturday as well as Sunday, though Aamir’s much-awaited film failed to beat day one record set by Shah Rukh Khan-starrer Happy New Year’s (Rs 44.97 crore) which was released during Diwali. And also failed to surpass “Dhoom 3” first-day collections, which stand is ₹36 crore.

“PK” witnessed decent growth on the second day at the domestic box office. The film, which minted ₹26.63 crore on the opening day, noticed about 15% growth on the second day of its release. “PK” minted ₹30.34 crore crore on day 2 and its two-day collections amount to over 56.97 core. It is likely to see good growth on Sunday and mint around 90 crore in its first weekend at the domestic box office.
2014-12-23
Jerin Nath
Share
Next Aamayum Muyalum Review