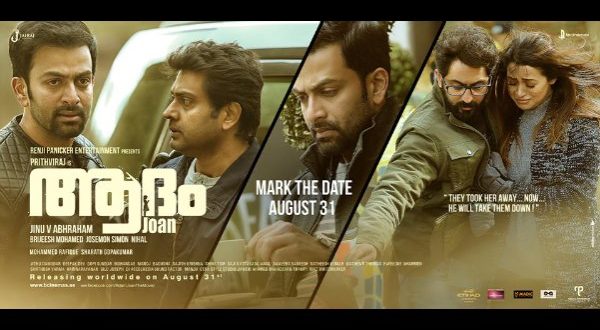 The movie is definitely a different experience for the Malayalam film audiences. 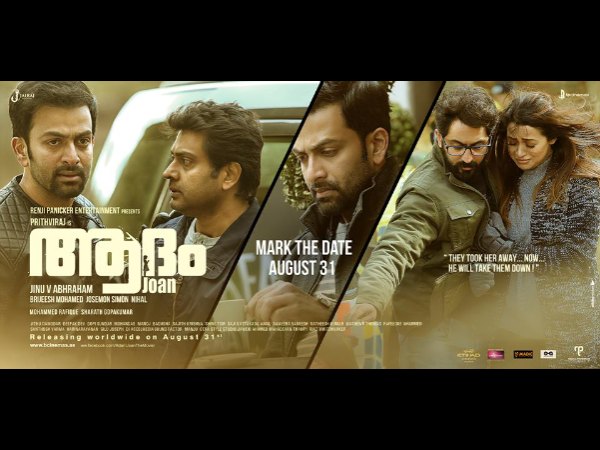 Adam Joan, the Prithviraj starrer which marks the directorial debut of Jinu Abraham.

he film has been tagged as a romantic thriller.

Jinu Abraham, the director himself has penned the script for Adam Joan. The expectations are good enough on this Prithviraj starrer.  The actor has delivered a yet another quality entertainer.

The story of Adam Joan revolves around a rich planter named Adam Joan. Once, Adam Joan meets a girl named Amy and he falls in love with her. With the consent of the families, they tie the knot and both Adam and Emy set off for a journey to Scotland but there certain events happen that startle Adam Joan’s life. What happens rest has been told in Adam Joan.

Popular actress Mishti Chakraborty makes a debut in Mollywood with Adam Joan. She essays the role of Emy, the lady love of Adam. She looked beautiful and a perfect match for Prithviraj. But, it has to be said that she has got comparatively lesser screen space in the film. Anyhow, it is a confident debut by the actress.
Prithviraj plays the title role of Adam Joan, a rich planter. Prithviraj perfectly fits in to the shoes of the character and we can see a super stylish Prithviraj in the movie. We simply can’t imagine anyone else as Adam Joan and that is the biggest success of the actor. In fact, the actor had to portray different phases of Adam Joan’s life and he pulls them off effortlessly. Watch out for the emotional sequences in which he grabs all the attention. Add to it the splendid dialogue delivery, what we get to see is yet another stellar performance from the actor.

Bhavana plays a character named Swetha in the movie. Her character holds due importance and she has brought in her experience to play, especially in emotional sequences and thus giving a matured performance.

It is good to see Narein back in Malayalam films, that too in a well-written role. The actor plays the role of Cyriac, one of the best friends of Adam Joan. Narein has given a decent performance as Cyriac.

It is never easy to make an investigative thriller, especially in Malayalam where the film will be subjected to a lot of scrutiny among the audiences. Jinu Abraham has dared to make such a film, that too with a different concept, not much discussed in Malayalam cinema. The director in him takes his own time to set the pace of the film in the first half and that might give a lagging feel to the audiences. But still, such a slow build up is quite necessary for the film, to score high on the emotional sequences. Importantly, the biggest challenge for the director was to keep the audiences thrilled and he has been able to hold the audiences tight with a taut narration. Yes, at times the film moves in a predictable manner, which is a negative but Jinu Abraham pull the film back on track, at the right time. Even the sequences, which had the chances to go down as cliched ones have gained a new lease of life with the smart making style of Jinu Abraham.

Well, Jithu Damodar is definitely a talent to reckon with. He has set some brilliant frames, capturing the amazing landscapes of Scotland, with the backing of a different tone. You ought to watch it from the theatres to taste the real essence of his splendid work.

In fact, the songs of the movie didn’t sound impressive during the time of their release. But, upon watching the movie, one would understand why Deepak Dev has opted for slow yet soothing tunes. The BGM of then film is also splendid, suiting particularly well to the mood of the movie.