Aravindante Adhithikal, which marks the comeback of Vineeth Sreenivasan-Sreenivasan team has hit the theatres today (Aprl 27, 2018). The trailer and the teaser of the film had promised a good family entertainer and let’s see whether the film has lived upto the promise or not.
Plot

The story of Aravindante Adhithikal surrounds around a person named Aravindan, who is the manager of one of the lodges situated in Kollur, Mookabika. Aravindan, who was abandoned by his mother while he was a kid, was brought up by Madhavan, the lodge’s owner. The film takes us through Aravindan, Madhavan and the some of the guests who arrive at their lodge.

Vineeth Sreenivasan portrays the role of Aravindan whereas Sreenivasan appears as Madhavan. It is always a joy to see both of them together on screen. Vineeth Sreenivasan has come up with a very reliable performance as the character had a lot of depth. He has done an equally good job in both emotional and the light sequences. Coming to Sreenivasan, it was a tailor-made role for him and he has done complete justice to the characters. Some of the counters of the actor do hit the right chords.

Nikhila Vimal has made a comeback to Malayalam films after her debut as a leading lady in Love 24X7. She has come with a strong performance as Varadha and in fact, she owns some of the sequences in the second half with her impactful performance. Popular actress Urvashi too, has come back to Mollywood after a short break and she gets to play a role laced with humour backdrop. The ever dependable actress does impress with her performance in the film and needless to say, her comic timing is mighty impressive.

Rest Of The Cast

The film has a long star cast and it features actors like Aju Varghese, Bijukuttan, Premkumar, KPAC Lalitha, Baiju, Kottayam Nazeer etc., in prominent roles. Most of them do justice to the comedy department. Aju Varghese and Vineeth Sreenivasan combo has worked big time. Similarly, Baiju and Bijukuttan also chip in with some light humour sequences. 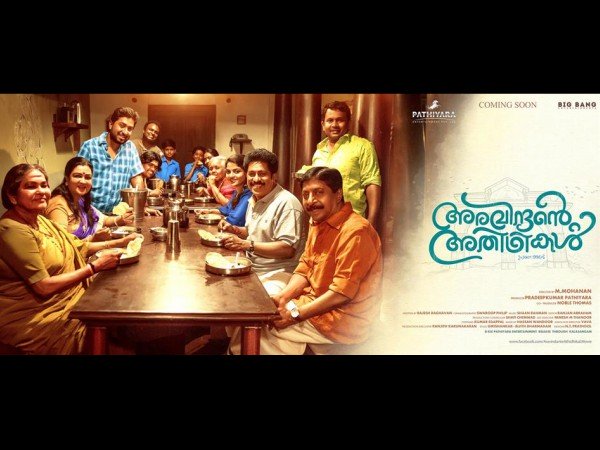 Aravindante Adhithikal is not a film that bangs high on the realistic quotient. It belongs to that set of commercial movies, which gives due importance to story and dramatic elements. Hence, the movie does follow a template format, which in effect has offered a fairly delectable product. Things are perfectly set up in the first half of the film with the introduction of the characters and arrival of the various guests. The initial portions of the film are filled with light-hearted comedy elements and feel-good portions. As mentioned above, music does play a crucial role in the progression of the storyline. It is in the second half that the film gets a shift in genre and as it tends to slide more towards the emotional angle. The predictability factor does linger throughout, in these portions, but the strong emotional connect that the movie establishes with the audiences helps the film to come out of that damage. However, there is an overdose of dramatic elements in some of the portions of the second half, which does pull the film down a bit. Nevertheless, the film doesn’t bore you or take away your interest.

Rajesh Raghavan has penned the script of the movie. The story of the film is something in the lines of the movies of the 80s and the 90s. Nevertheless, it has the right elements to connect with the audiences. The screenplay of the film has been well-knit by adding feel-good and dramatic moments in right proportions. The premise in which the story is set is also refreshing. At the same time, some of the characters have been under-developed and with too many characters, the proceedings did look a bit crowded at portions. M Mohanan knows how to make entertainers with feel-good elements and he has pulled it off with ease, this time as well. With his making style he has been able to bring in that emotional connect at the required portions. At the same time, it was refreshing to see the way in which he has handled the romantic sequences, which was a core part of the film.