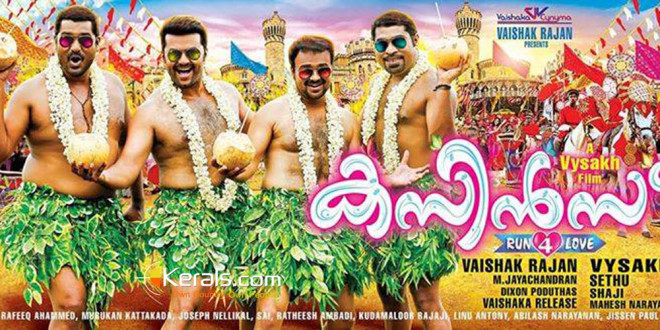 Share
Turning the screen into a riot of colours, shooting songs at  exorbitant costs and sticking to a time tested formula. Well there is a limit to taking the audience for a ride. Director Vysakh cant be blamed for having the gumption for having attempted a royal disaster like 'Cousins', after&hellip;
Cousins Malayalam Movie Review
Cousins Malayalam Movie Review
Jerin Nath

'Cousins' is a glittering mess.

Turning the screen into a riot of colours, shooting songs at  exorbitant costs and sticking to a time tested formula. Well there is a limit to taking the audience for a ride. Director Vysakh cant be blamed for having the gumption for having attempted a royal disaster like ‘Cousins’, after all he did rake in some serious moneywith his initial  offerings which were insufferable for a sensible movie lover. ‘Cousins’ is a case of indulgence of the most abominable kind. It tries to forcefully make the viewer swallow an anachronistic concept of festival entertainment.

As the title suggests it is a tale of cousins, four in number. A tale of their journey to discover something that has a bearing on the present  life of one among them. Familiar jokes, oneliners, twist come in a predicable procession and when you finally think that the ordeal is over, there comes another one which is the last straw on the camel’s  back.

Sam (Kunchacko Boban) suffers from a peculiar form of memory loss. His cousins Joji (Indrajith), Tony (Joju), and Pauly (Suraj) accompany him on a journey to unearth something which happened in the past. The customary flashbacks did build up some promise. But they fizzle out leaving the viewer high and dry. The much vaunted song sequences look absolutely cooked up.The quartet who reach  Chandragiri Palace to dig into Sam’s past are in for some  surprises.Vedhika and Nisha Agarwal comes into the narrative at this  juncture.

The inevitable plunge into a shoddy end happens and the dreariness of it all gets under your skin. Performances which should have been the strength of the movie turns out to be its biggest liability. Except for Indrajith, Kunchacko Boban and Suraj Venjarumoodu to an extent, rest of the cast simply fail to perk up the movie. Joju who is given a weighty role struggles with his comic timing while  Kalabhavan Shajon is way over the board. The female cast look pretty and do a good job of not fluffing the dance steps. Others go through the motions as though they are having a picnic.

Sethu’s script is a huge let down and Vysakh’s best efforts dont get registered principally because of this. It is unfortunate that such a highly budgeted venture has such an inane storyline. Shaji’s frames do have lot of colour but little inventiveness. M.Jayachandran has not  done himself any good with average compositions. Gopi Sundar brings nothing new to the plate with his BGM either. ‘Cousins’ is like an old product which was lying in some non descript corner. Taking that old product and trying to present it as new with a gaudy makeover is  indeed what the makers attempted ,practically. Well, isnt it unbecoming to sell a product well past the expiry date?
Reviews 2014-12-23
Jerin Nath
Share